From Pistols & Patriots to Poets, Pigeon Forge and Paula Deen

It's been a very busy day today.  I planned a route where we could see 2 national military parks and a monument and still get to Pigeon Forge, Tennessee in 4.5 hours...of course, we had to stop for a couple of meetings Scott had at a rest stop with his boss and I don't drive the RV as fast on windy roads, but before 5 pm we'd done it all.
We left Charlotte, North Carolina this morning at 8:00 a.m. and traveled southwest, crossing just over the South Carolina border to the town of Blacksburg and visit King Mountain National Military Park to learn more about our country's Revolutionary War history. 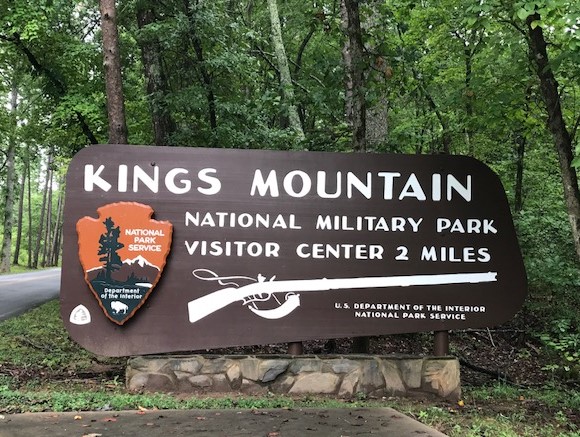 According to the National Parks brochures, Thomas Jefferson called it "The turn of the tide of success".  The battle of Kings Mountain, fought October 7, 1780, was an important American victory during the Revolutionary War. The battle was the first major patriot victory to occur after the British invasion of Charleston, S.C. in May 1780.  The park preserves the site of this important battle. 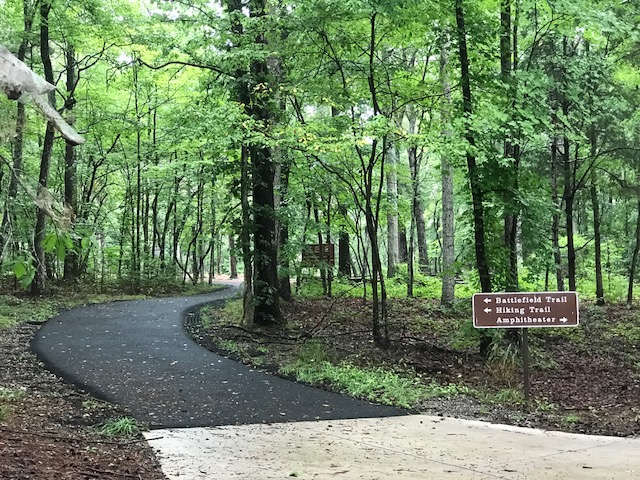 Kings Mountain is a unique battle for several reason.  It was one of the few major battles of the war fought entirely between Americans: no British troops served here.  In the South, many people were divided.  When the war started, some fought for independence, others for loyalty to England. Kings Mountain is also unique in the large numbers of riflemen fought here.  Rifles were not used much by the armies.  A rifle was a hunting weapon, used by families on the frontier.  The American militia that fought here mainly used rifles; the Loyalist troops had mostly muskets.  The difference between a rifle and a musket is speed versus accuracy.  A rifle is slow to load, but very accurate.  Riflemen can hit a target at 200-300 yards.  Yet the rifle can only be fired one a minute.  A musket, with a smooth bore, is easy to load but inaccurate. Muskets have an accurate range of about 100 yards, but can be fired up to three times a minute.

You can see artifacts here from their little museum at the visitor's center. 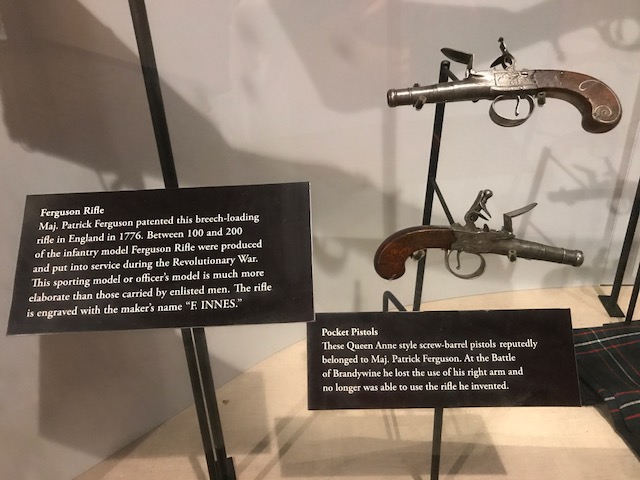 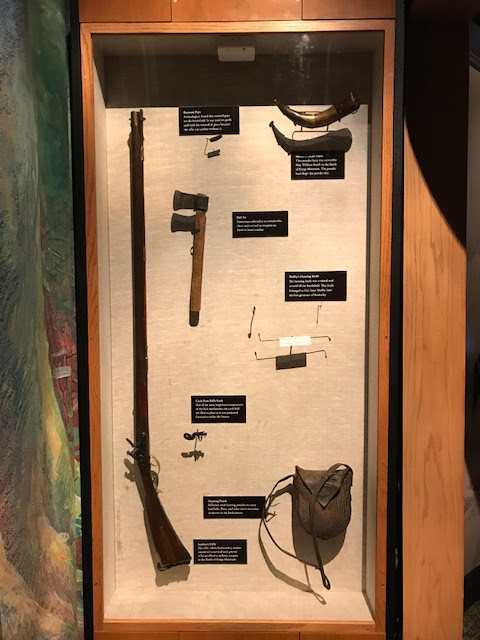 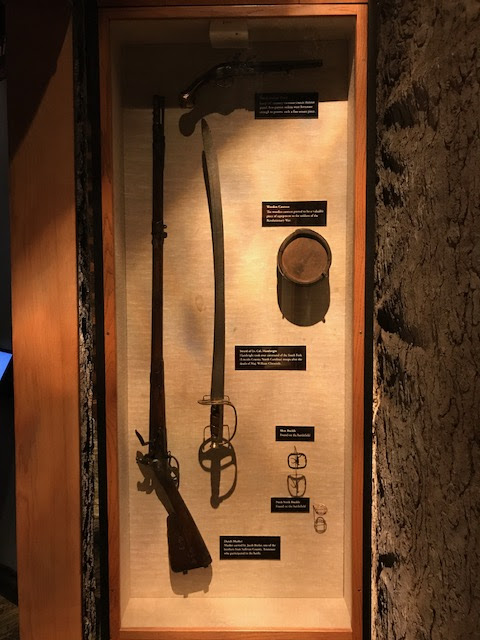 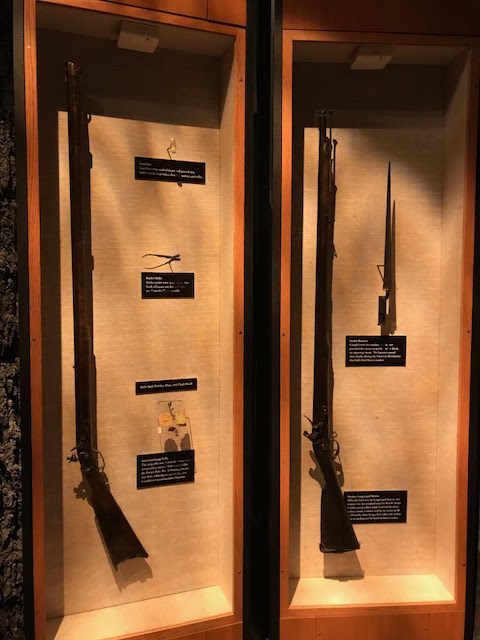 The visitor's center was lovely with very friendly and helpful rangers.
King Mountain NHP's only disappointment is that there was very little parking at this park and we double parked across all the "Bus/RV" parking area that was park style that was so small that it would fit a small bus.  So, my suggestion if you ever go to this site is to arrive very early in the morning before the crowds arrive.

Next, we traveled 25 minutes to Cowpens National Battlefield Park in Gaffney, South Carolina but in order to do this we had to drive back to North Carolina and back down to South Carolina. 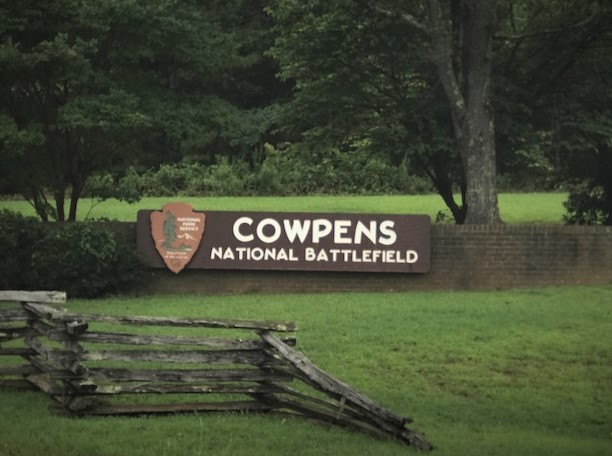 Cowpens is another unique battlefield from the Revolutionary War.  It was just a 2-hour battle that occurred on January 17, 1781 with Daniel Morgan leading his army of tough Continentals and backwoods militia from South Carolina, North Carolina and Virginia and sharpshooters from Georgia to a strategic victory over Banastre Tarleton's British regulars.  I watched the 12 minute video on the subject and was surprised by the thoughtful planning of the battle on both sides.  It was the turning point of the war in the South; part of a chain of events that helped end the war in Yorktown.
They also had a nice small display behind the video area. 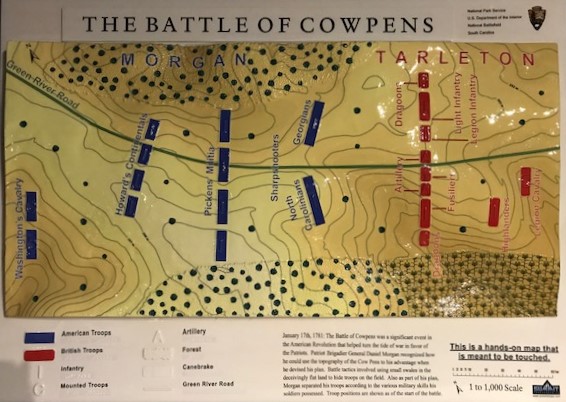 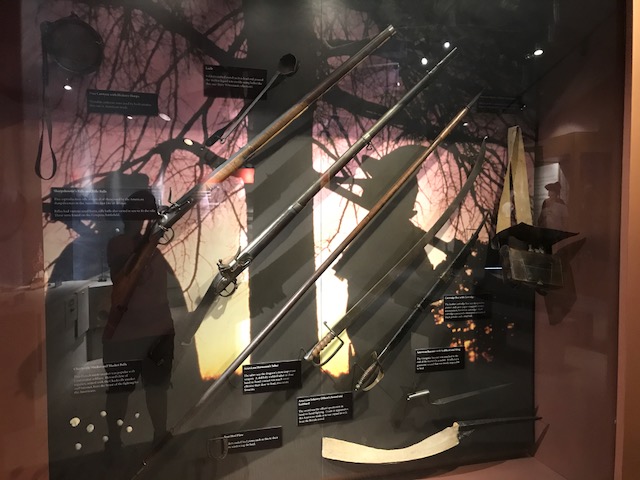 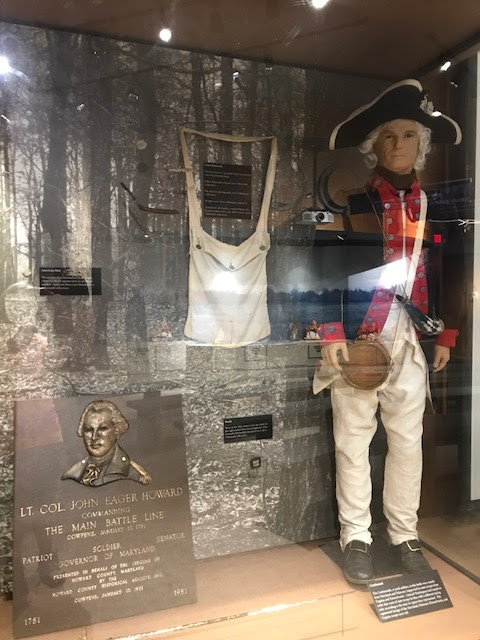 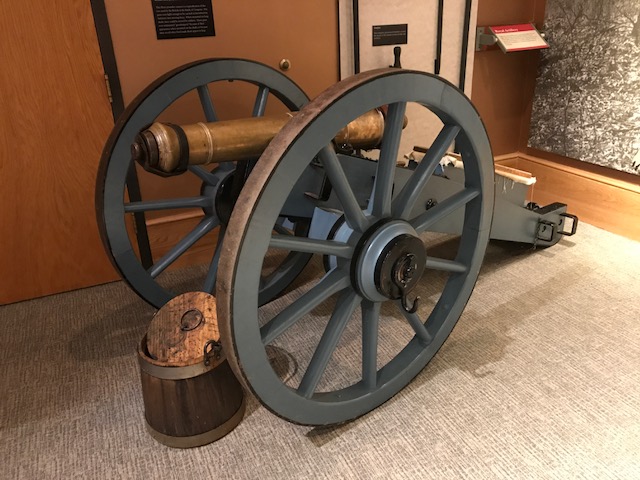 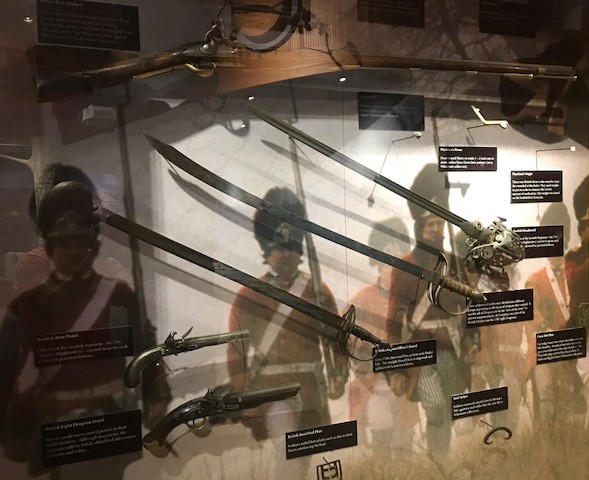 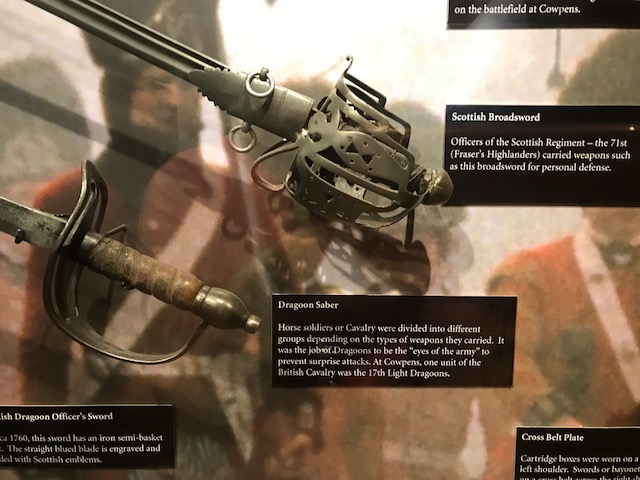 A wonderfully appropriate statue was erected at Kings Mountain with 4 sides commemorating this battle. 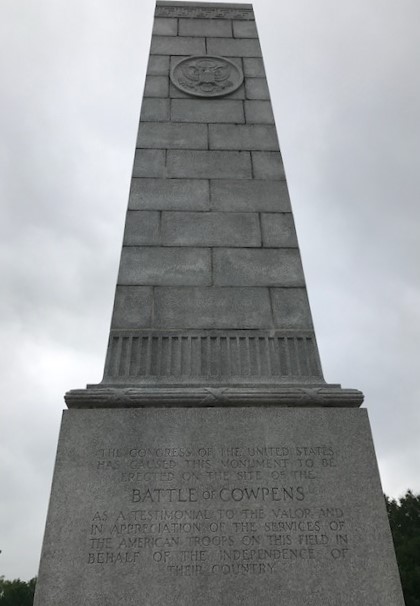 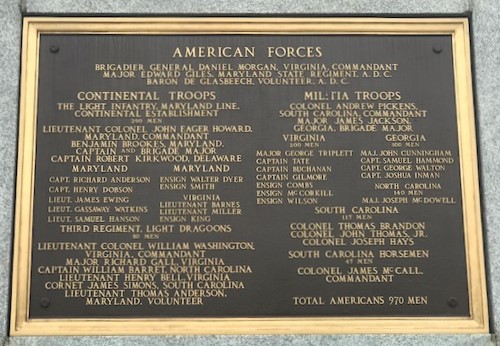 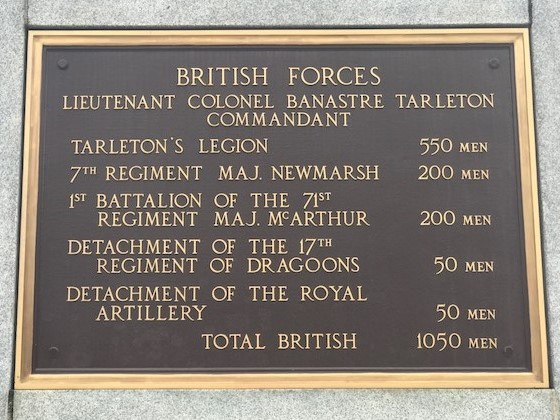 The scenery at Cowpens also looked much like that of Guilford Courthouse yesterday and Kings Mountain earlier. The sites were quite close together.  I also noted yesterday that the leaves are already starting to change here in the south.  I've seen groupings of crimson maples, rush bushes and gold and orange leafed trees spotting the landscape as I've drove but couldn't stop to take photos due to lack of a place to do so. 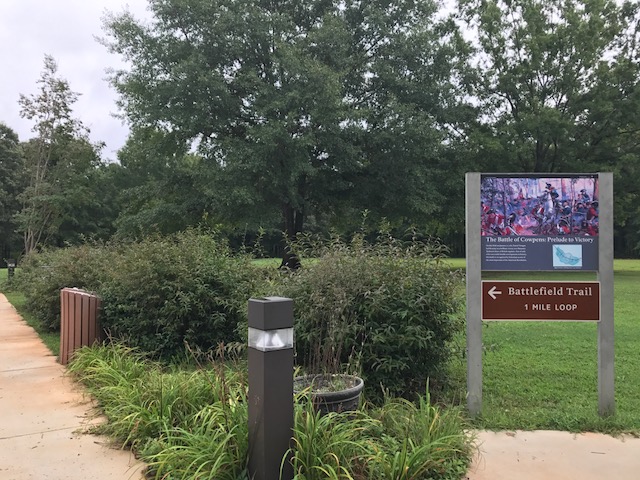 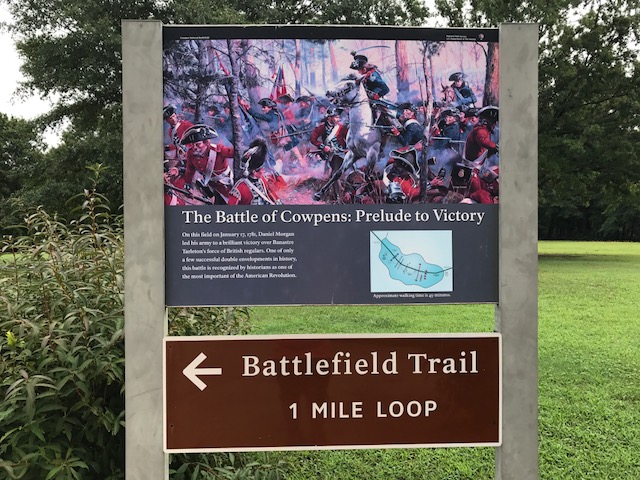 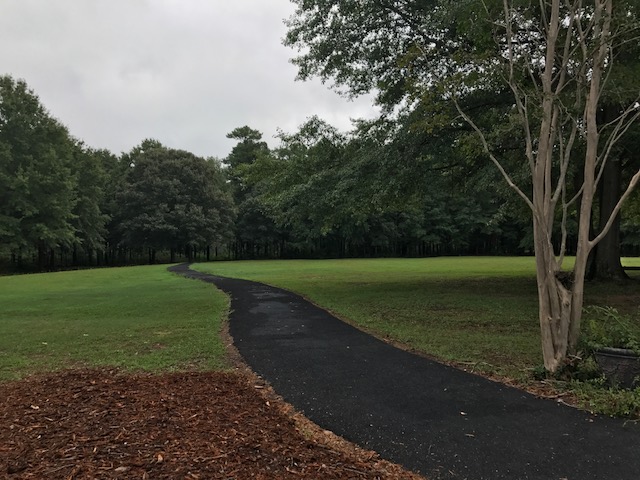 The nice thing about Cowpens is that there is plenty of parking and the battlefield is only a 1-mile walk.  Big rigs and RV can easily park at their parking lot but the roads are narrow and tree-lined. 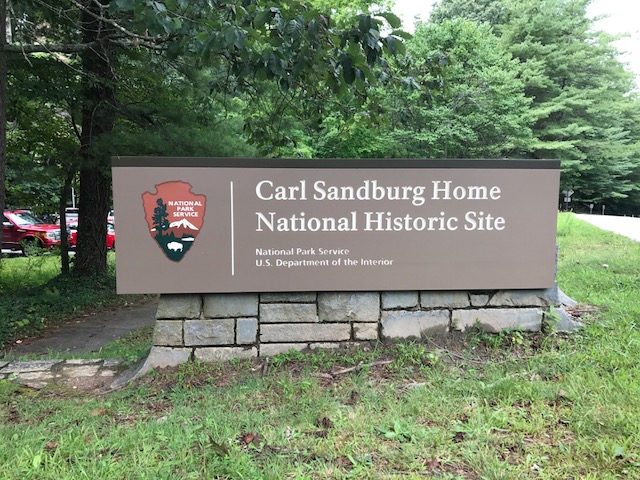 Before I continue it's imperative that if you have an RV, DO NOT to go into the parking lot. There is no room and nowhere to back up.  Across the street from the visitor's center parking lot is a large area on the size of the road that we parked next to the Flat Rock theater back lot.  If you do park on the side of the road, do yourself a huge favor if you can and then swing wide into the theater parking lot and then circle around and exit.  If you don't, you'll end up going through a very tight low tree-lined neighborhood and you'll regret it...ask me how I know another day...I'm still recuperating from today!

The Carl Sandburg landscape was breathtakingly serene.  Just quaint and charming; a perfect setting for a poet. To access his home, you walk along a path about half a mile uphill but you pass a beautiful lake, lush fields and a gorgeous rock wall up to his home that is lined with trees.  The white house stands out above the hill when see first come to the lake.  It's bright white.  The visitor's center is housed in their 2-car garage.  There are tickets to tour the home but today they were free because the furnishings had been removed from the house.  Normally, I believe they are $5 per person.  I wasn't able to see the interior of the house because I would have to wait an hour and Scott and the girls were in the truck, so I toured the grounds, took photos and walked back to the RV.
Poet, minstrel, lecturer, biographer and Pulitzer Prize winner, Carl Sandburg,  wrote, "It is necessary now and then for a man to go away by himself and experience loneliness; to sit on a rock in the forest and to ask himself, "Who am I, and where have I been, and where am I going?" You can plainly see why Sandburg moved his family to the Blue Ridge mountains in 1945 to the farm that his wife Lilian discovered.  Their farm was called Connemara, where the family lived and raised goats, and where Carl Sandburg lived for 22 years writing poetry.
It is definitely worth the trip to this location and just know that the parking lot was full when I was there about 11:45 a.m., but it's a popular place to visit.

We stopped at this cute rest stop while Scott had a meeting with his boss.  I took the girls for a long walk but I noticed a bug on my shoe that wouldn't get off no matter how hard I tried and realized it was a tick. OH NO! I checked the girls over and put them back in the car. I'm not a fan of those dreaded creatures.
While driving we ran into traffic...if only I could go 55 mph.  It was more like 7 mph!
And so, I started a new audiobook called "A Single Thread" by Marie Bostwick since I finished "The Spymistress" yesterday. 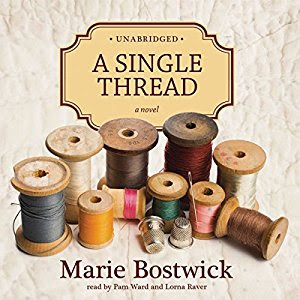 Next, I drove us on to Pigeon Forge, North Carolina. It was fairly close, but took a bit of time due to narrow roads and traffic. We haven't been to Gatlinburg for nearly 30 years, and I was shocked to see how HUGE Pigeon Forge had become.  Back then, it was a sleepy town with Dollywood at it's core.

We arrived at Eagle's Nest Campground, our RV destination for the next 4-5 nights at about 4:30 p.m.  We got all squared away and moved to our site, 46A, and started getting set up to realize that the people in unit 46, had our utility connections.  We had already unhitched and lowered the stabilizers at this point. I pointed it out when we first arrived but Scott thought they must be somewhere else.  He finally went to the office and the office noticed that the people in 46 had pulled into their spot the wrong direction and had our hook-ups. They had to pack up and turn their Class A around and were NOT happy about it.  Not a great way to start off our visit here. *SIGH*.  Finally, everyone got squared away and we were all set up.  I like our spot because we are on the end and Coco and Chanel have a large area to play in. The restrooms, showers, laundry and pool are right across the street. Perfect!  I'll post more on our campground tomorrow...

I was really tired by now but Scott wanted a good dinner and so we hopped back in the truck and found our way to "The Island in Pigeon Forge."  It's a fun little place with restaurants, rides and shops...almost like a mini amusement park.  We found a parking place and took the tram ride to the center of the action and decided to eat at Paula Deen's restaurant.  The food was great but I was disappointed you couldn't have your left-overs home with you, especially since we don't eat a lot and didn't have seconds. The girls would have loved the left over pot roast.  Oh well.
Well, it's been a long day.  We went to North Carolina 3 times, South Carolina twice and Tennessee.  I'm tired.  Wishing you all a good night.
at August 15, 2017