The last place we visited today was in El Paso, Texas at the Chamizal National Memorial.  To be totally honest, I'd never heard of this memorial and was kind of so-so about going here, but once I was here, it was a very, very interesting place. 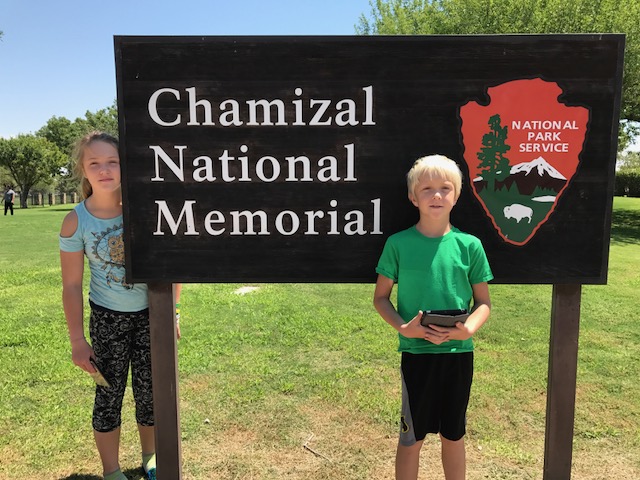 History of Chamizal - In a nutshell, there was dispute in 1860 over a piece of Mexican farmland called the Chamizal tract in Juarez, Mexico that also included an island.  The original north border was the Rio Grande river, which was the international border.  The problem came when the river started to shift it's course and by 1880, the Chamizal tract was now within the US border.  So, who owned it? The Mexicans or the Americans?  So, over the years the Mexicans decided to claim it all and from 1911-1960 there was a huge dispute over this land which affected residents of both El Paso and Juarez, a settlement just over the border.  Finally in 1962, President John F. Kennedy and President Lopez Mateos of Mexio worked out an agreement which split theland andin 1963, the agreement was signed by President Lyndon B. Johnson and President Diaz Ordaz where they met on the international bridge near Chamizal to open the new river channel.

Chamizal National Memorial is actually set right on the Mexican border in El Paso.  The memorial has a large stage for cultural events with a beautiful visitor's center.  No RV parking is available, BUT the parking lot is so large that I took up 6 spaces in the far side.  So, don't let parking hinder you.  By the way, when you come to the fork in the road as you enter, parking and the visitor's center is on the left.

The visitor's center has a beautiful mural on the outside of the building. 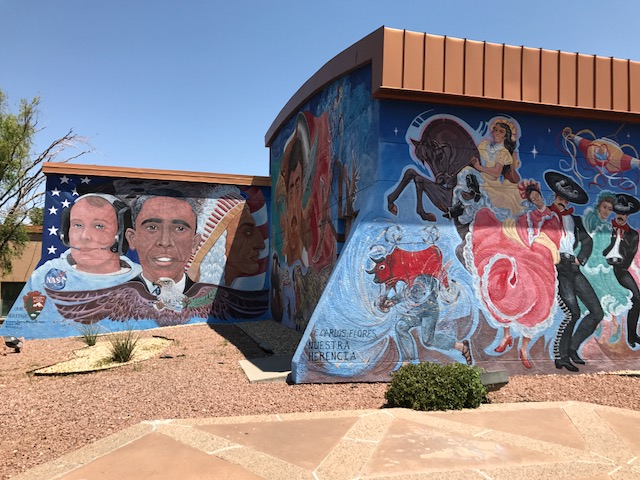 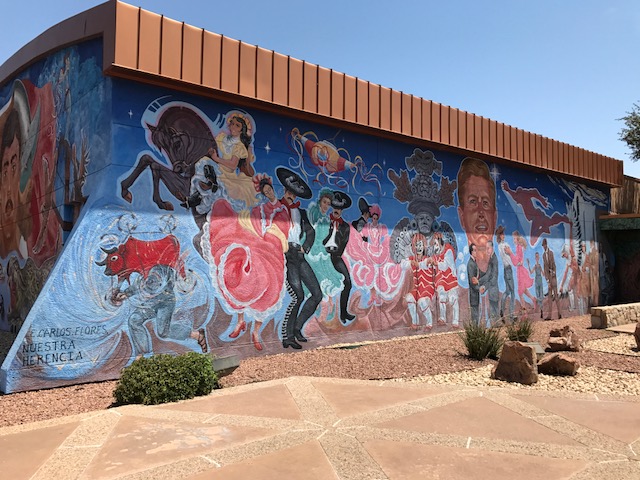 Hunter and Cierra and I watched a 5 minute video which explained the dispute over the tract of land and they also had a wonderful display area and collection of Mexican dolls. I could have taken every one of them home! 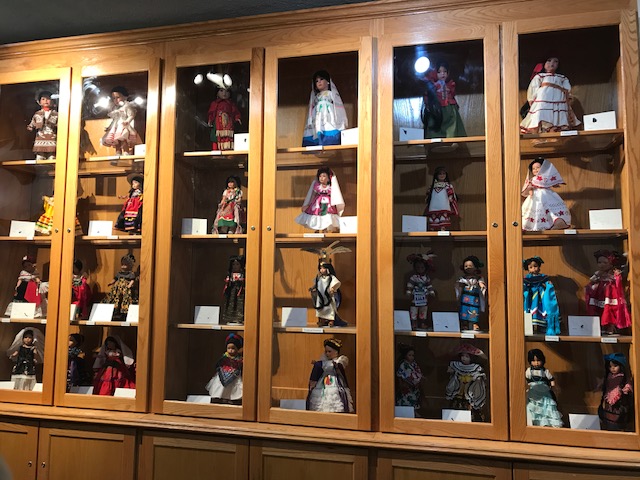 Also, in the visitor's center is another lovely mural with bathrooms right inside the building.  They also have a small shop. They do not have any coins, nor did they have a location sticker, but they did have 3-4 different stamps for my book.
Chamizal does have a Junior Ranger program (3 types of activity books) but we didn't do this one...we probably should have but I wanted to getto Fort Davis, Texas before their visitor's center closed. Had I remembered that there was a time change in Texas we should have stayed and completed it. But,Hunter had fun at the Junior Ranger station all the same and I'm sure the kids were relieved not to have to do work. 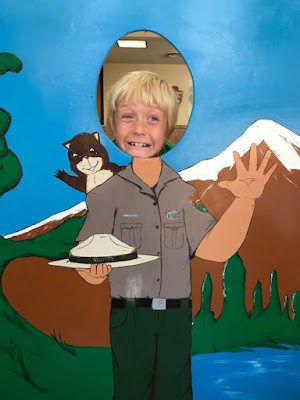 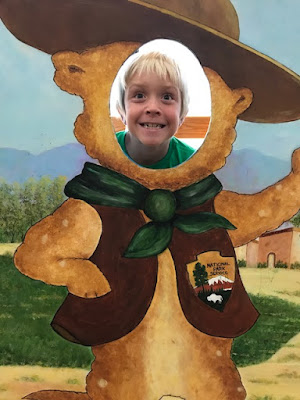 Once we went back outside after our tour, I noticed that I saw the Mexican border and the international wall, so I had the kids pose with some fun border pictures.  They thought they were going to get to go to Mexico, but we weren't...no passports for the kids for one and Scott wouldn't allow it for two.
When we arrived back at the RV, Scott was busy talking to a man who was interested in buying one when his wife retired from the Army, so we were late getting out of El Paso. 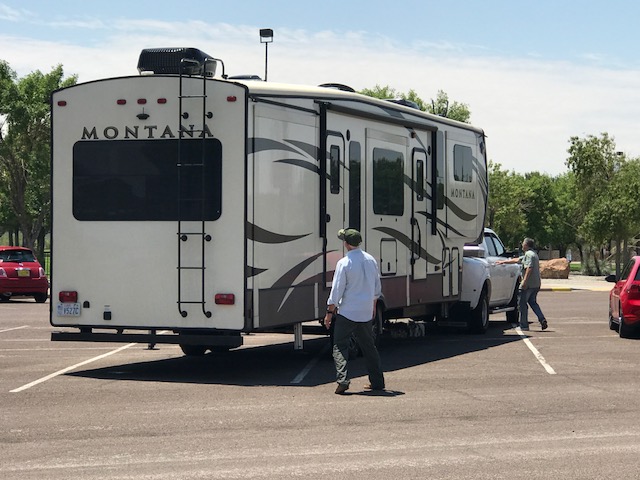 I do have to say when I got off the freeway (which was a nightmare), it looked like we were in the slums and I was pretty nervous.  It wasn't until we got onto the street where the memorial was that I exhaled.

While Scott was showing the guy the RV and given him some tips, I saw another Mexico sign so the kids got their pictures taken with that one, too. This was actually on the road we had to exit on, so we got a good pictures of  it before we started our journey to Fort Davis. 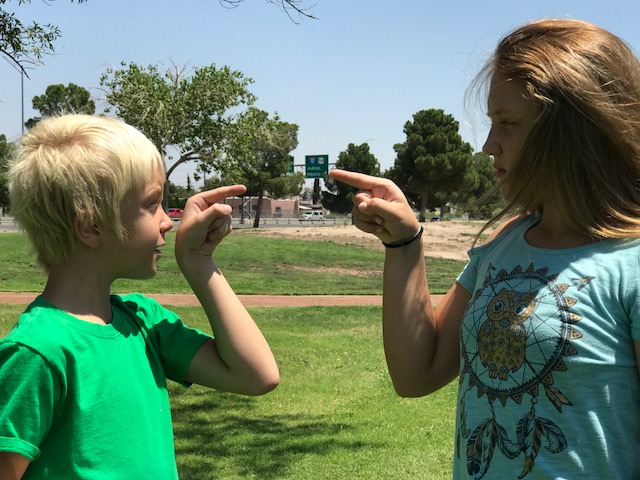 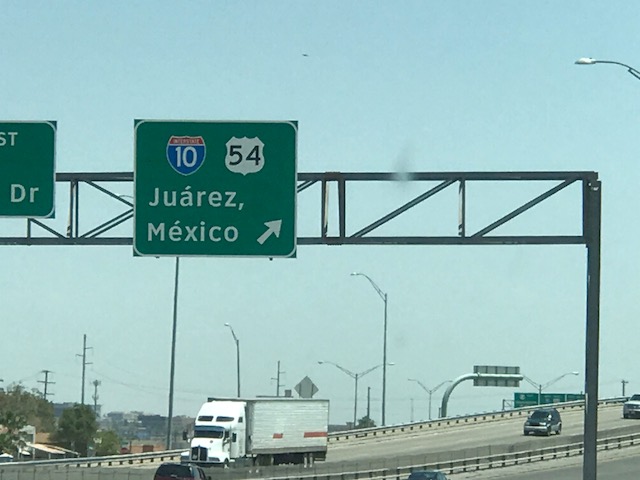 This memorial was very informational and educational and I would highly recommend going to learn about it.