Yesterday, I don't know what I did but I really hurt my back after I got out of bed.  I think I just bend funny and it's been tweaked all day.  But, after an hour of heat on my back, it felt a little better and we went the 55 miles over to Yuma.  I had actually planned on going to the Yuma Territorial Prison and other tourist sites but our day took a different turn than we planned. 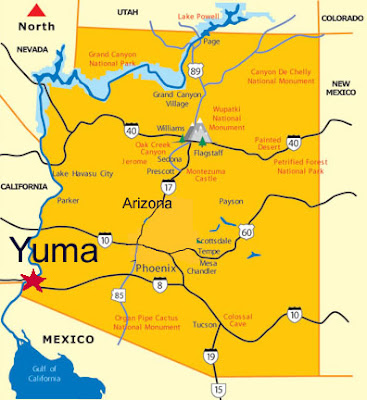 The first place we went to was Grandma Jo's Quilt Shop on the east side of Yuma.  There I found a couple of cute patterns for a casserole dish cover, a supply binder and I bought a few fat quarters to make a sit and stitch pin cushion for the chair or edge of the sofa where I can stitch, put my scissors and thread, etc. 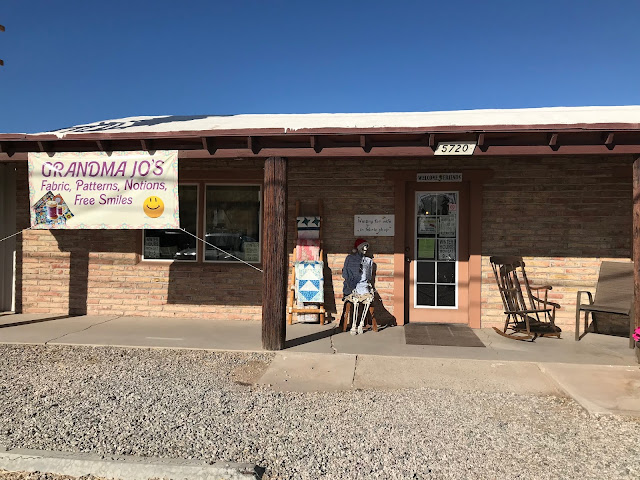 The shop was cute but very small.  All the girls here at Desert Trails said it was the only quilt store in Yuma so I had to go check it out.  While they were super friendly and the shop had a nice supply of books and patterns, the fabric was not the best.  Not one single Moda fabric.  They did have a room full of batiks, which was impressive, but nothing that really stood out.  And, I didn't think the fabric was the best they could have put in a quilt shop.  They did have a huge display of southwestern fabrics, appropriate for the locale, but not for regular quilter.  I could see selling it because you were in the desert, but that's all and it's kind of cheesy, in my opinion. 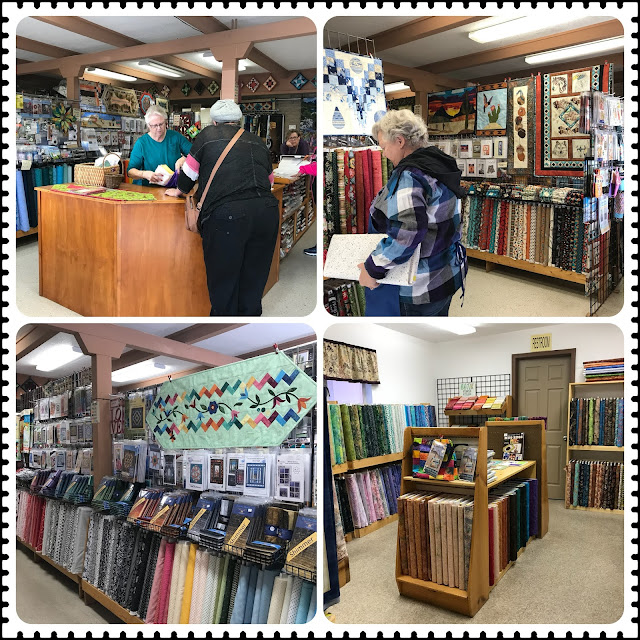 After the shopping, Scott wanted to drive over to an RV resort down the street called The Palms RV Resort.  Apparently, there are over 60+ RV parks in Yuma.  It's the warmest town in Arizona during the winter months and 150,000 people flock to Yuma from Canada and other US states during the winter.  Yesterday, the weather in Yuma was 78 degrees and so nice!  It was 75 in El Centro. 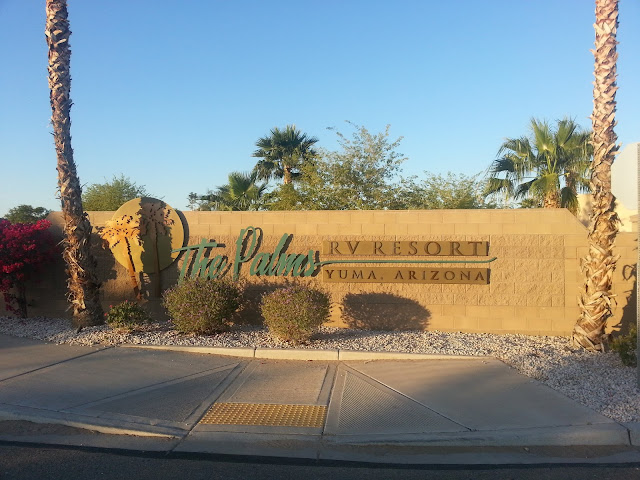 There is security at The Palms and they keep track of every visiting car in the park via walky-talky.  The Palms is an interesting park in that there is a central gathering facility for events - a fitness room, splash pool, lap pool and hot tub, library, mailboxes, crafts areas for pottery, lapidary, quilting, etc., outdoor grill to purchase food from, a ballroom where they have bi-weekly tribute concerts, shuffleboard courts, dog grooming station, etc. 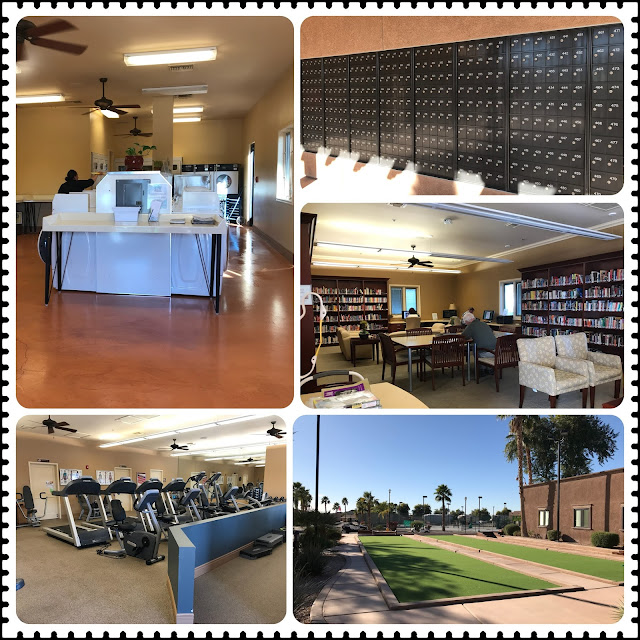 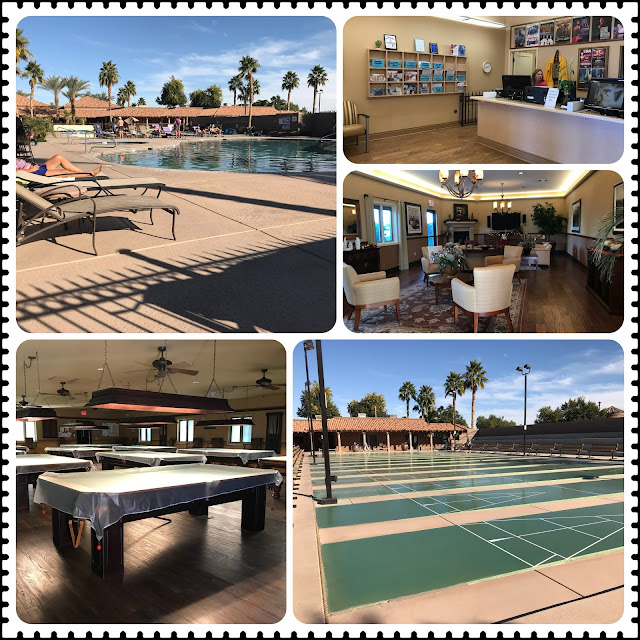 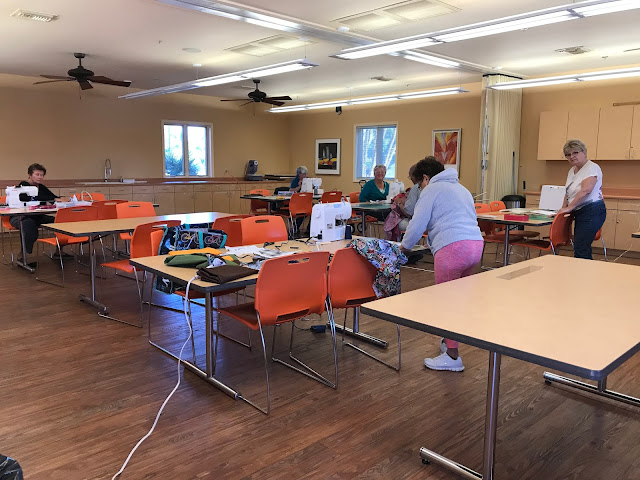 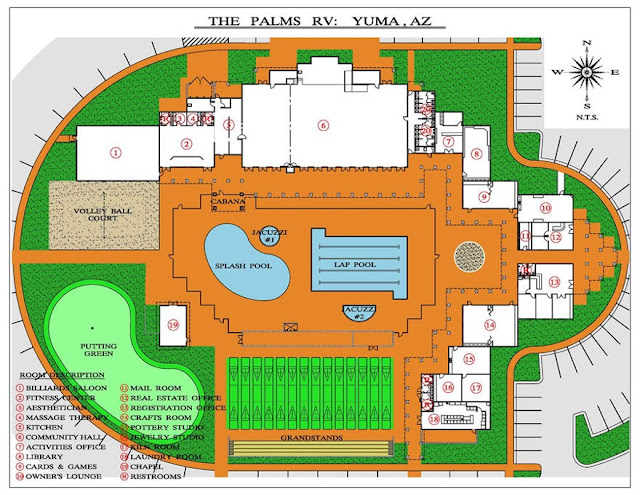 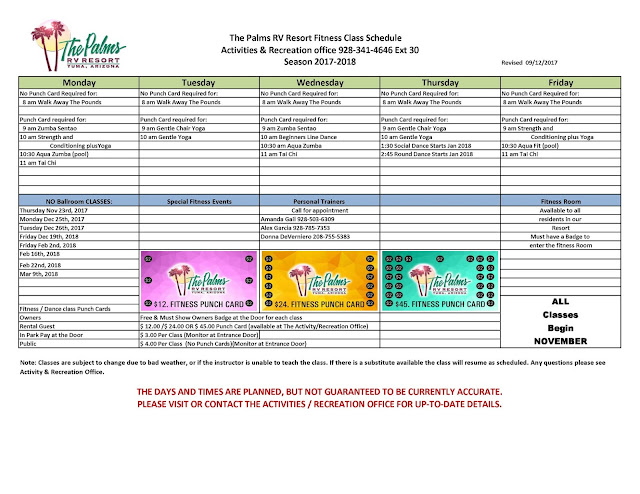 The resort is unique in that you can purchase your pad and build a house, gazebo, or casita on that pad, or just rent a space for the winter.  Right now they are having a special for next winter - your rent 3 months and get 3 months free!  So, it would be about $1700 for the winter, which is great!  The cost of the pad to purchase is $39K, which gives you access to all amenities, etc.  Each space can be leased out in the months you aren't there.  The icky part of the park for me is that it's a desert wasteland other than the central activity center.  There are very few trees and the palms there are not big palms but small skinny kind.  Lots are nothing but gravel with a small concrete pad and each site is back-in only.  Some site (generally on the ends) are larger and wider and most sites are quite deep. 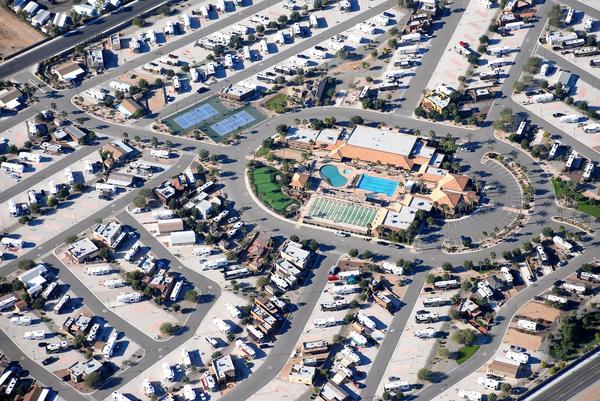 Here's a map of the park.  I like the layout and I like the north section of the park more than any other near the small dog park. 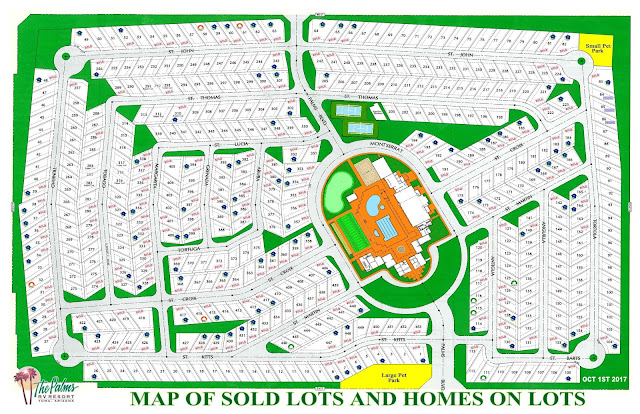 Before we knew it, we had spent nearly 3 hours there, so we decided we better get home since the girls were back in El Centro.  But, we stopped at Cracker Barrel for a bite to eat on the way home.  We were home at 5:30 and enjoyed the day despite my back aching. 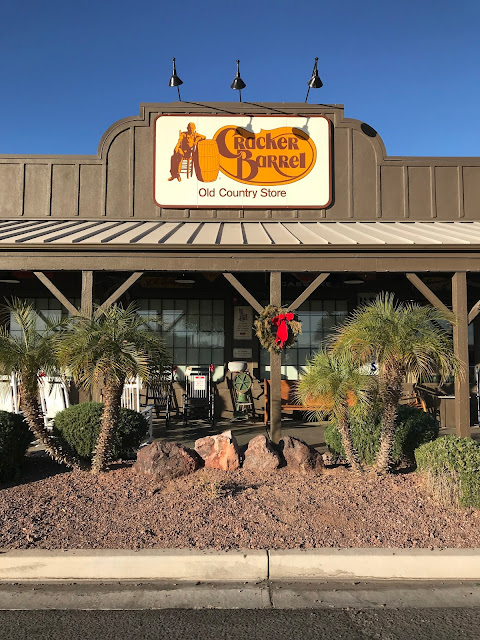 We've decided that maybe we'll go to Arizona next winter even thought we thought perhaps we'd go to Florida...not sure yet.  But, we will be making a few more trips over to Yuma and see what we can see.  There is a couple here at Desert Trails in the temporary area from Roosevelt, Utah, heading over to Yuma today where they stay for the winter.  They said they used to come to Desert Trails years and years ago but people don't come here as much as they used to.  Hmmm.  Wonder why.  They said Desert Trails was packed every year but over the years not as much.  They said Yuma was hard to get into and now it's easier.  I suppose with over 60 RV parks, it's easier to get into the place you want to be.  Maybe that's why The Palms offers 1/2 off on winter sites.  Regardless, we'll keep searching and see what we can see in Yuma.

Today, we're going to hang out here in El Centro.  I'm heading over to the pool and hot tub for my stiff back.  Scott's off to get a haircut and then we'll see what we decide to do after that.
at December 28, 2017